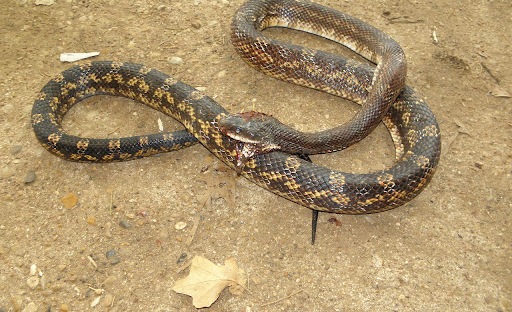 I suppose everyone has at least one irrational fear, mine is snakes.  Now I understand that given the fact that some snakes are poisonous and can make you terribly sick if not dead, some might not consider a fear of snakes irrational.  But, if you had ever witnessed my reactions to ANY snake you would agree, my fear is irrational.  Irrational and hysterical to any onlookers.

This spring and summer have been extremely difficult for my nerves.  A loose count puts us at having killed or seen over 15 snakes.  Now, most of these have been non-venomous rat and chicken snakes.  Not deadly, the chicks, eggs, and chickens would, however; consider these guys deadly, but not us humans.  Unless you count the damage that you do to your self trying to get away.  The last chicken snake was killed last night with a egg in its mouth while attempting to strangle the chicken that it had wrapped up in its coils.  Man, I am glad that my husband and my kids will handle these things.

Yes, you read that right.  My kids kill snakes and I let them.  Cheyenne is the one most commonly running after the offender with a gun, but Savannah has killed her share.  Jonathan has got his licks in too, under the supervision of his father- I am not that hysterical. With this many snakes trying to live on our farm, there is plenty of shooting to go around.  Most of the snakes in the chicken house have been huge.  The copperheads that have been seen or killed have been considerably smaller-but they are the dangerous ones. The sheer size of rat and chicken snakes will scare the devil out of lots of people.

But even the tiniest snakes can send me packing.  While cleaning up a junk pile, Tony found a tiny garden snake.  He caught it for Jonathan, who loves snakes and always wants to bring them inside.  I have let him a couple of times but they always escape and that is another story all together.  So, Jonathan has the little fellow in his hand and turned around.  In doing so when her turned his hand was pointing towards to me with its little snake head facing right at me.  Its crazy, but my chest seized up and my breathing stopped while my heart rate went crazy.  This is what makes me say this fear is irrational, the snake was harmless and tiny but it still scared me spit-less.

The kids still laugh at the memory of when a racer came out of wood pile and hit me in the leg.  I yelped and ran across the paddock (leaving my children alone with the thing I fear the most).  They all laughed at me while Cheyenne ran to the house to get a gun.  The snake went under an old Bronco we had.  Now all the children are squatted  down peering under the Bronco ready to shoot the snake on site.  However, no one considered what buck shot and a gas tank would do when combined and I had to put a stop to the snake hunt.  Alas, the snake lived to hunt another day.  I still maintain that my response was completely sane and with the bounds of normal behavior.

I once again abandoned my child to a snake just this morning.  Cheyenne and I were cleaning up the milking parlor.  She was standing inside the parlor moving bead board and I was just outside moving trash to the burn box.  I stepped inside and grabbed a folded up tarp.  Sliding the tarp underneath a table several feet away revealed a large copperhead in the corner.  I yelped and and managed to shout “snake” as I jumped over the milking stand into the alley of the barn.  This left Cheyenne in the milking parlor with the snake in between her and the exit and she still wasn’t even certain where the snake was.  It didn’t take her long to locate it and she then sprinted to the house for a gun.  I remained in the alley, watching.  She returned quickly and after a lot poking about she located the varmint and blew a whole in the thing.  We were both jittery after that and  it was hard to concentrate on our work.  We did manage to get the milking parlor cleaned up and the lumber brought up to the house.  Just another day on the farm.

I know snakes play a vital role in our ecosystem.  For this reason, I have reigned in my reactions enough that I can leave the garden snakes alone.  Correction, I haven’t reigned in my reactions, I just don’t go get someone to kill the thing.  I move to another job in garden leaving the snake to do its business.  We do kill those snakes posing harm to our chickens and poisonous snakes in the areas where people must work.  As for the woods, snakes are free to roam and do their thing and I won’t go looking for them.

On an interesting side note.  Jonathan had the snake from last night laid out on the porch.  I noticed these purplish little glands on its belly.  I asked, “What are these?”  Jonathan replied, “His testicles, Mom.”  Me, ” I didn’t know snakes had testicles.”  To this obviously stupid statement Jonathan replies, ” How else are they going to reproduce?”  Well, yeah, I just never thought about it, much less saw snake testicles.  Homeschooling  happens every which away around here.

1 thought on “Oh How I HATE Snakes”