While picking up feed today, my cousin, Kodi, called to see if today was a good day for a visit.  Of course, I said yes.  One of the great joys of having a farm is to get to share it with others, especially kids.  I love to hear them giggle and to see their eyes dance.  Each reacts differently to the animals and to the knowledge gained as to where their food come from.  I whole-hardheartedly believe that if you introduce kids to the circle of life early it is just a fact of life.  Emotions have yet to be attached and all animals have not yet fallen into the category of “pet”.  This makes it easier to understand that in order for us to live something must die.  This is a fact that we can not escape- even a vegan kills a carrot to have carrots for dinner.

First, we fed treats to the goats and the heifer, then we held baby chicks, and then went to the big chicken house to collect eggs.  After gathering the eggs, we brought some rabbits inside to play with and feed treats.   One of the kiddos that Kodi brought over just kept asking if we could eat the egg that she got from the hens.   I got so tickled at her and I agreed.  So, then all the kids (6) had to have a turn cracking eggs into the bowl.  Kids are fun!

Kids are handy, too.  I had an earthworm bin that was ready to be divided.  This involves picking the worms out of the soil contained in the bin and then rebuilding the bins.  For this job, we spread newspaper out on the table and I dumped the contents into the middle and the kids hunted up the earthworms and put them bowls for me.  By the time they did this, I had their eggs cooked.  Everyone ate good- except Luke he doesn’t do eggs.  Then it was time to go.  I had a lot of fun and so did they.  I hope some seeds were planted that will cause them to care about where their food comes from and how it got to them. 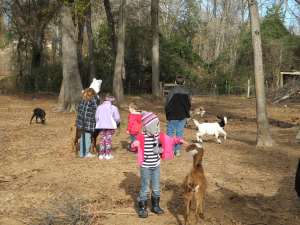 The sun has set and it is just about time to go round up the chickens.  I have a batch of hens that prefer to sleep in the hay-feeder and roam all day long.  Usually this is ok, because the dogs keep most predators away. However, I lost another bird last night so all the hens must go to the hen house for awhile.  I know they don’t like it, but it is for their own good.  If I wait till they are asleep, all I have to do is go pick them up and move them.  The hens won’t fly away even though their neighbors keep disappearing- which is the reason they are such easy targets for night time predators.

Chickens are funny creatures, they make us laugh often.  Often times chickens get the bad wrap of being stupid birds, but this is really not true.  They are smart enough to come in out of the rain, it is just that the rain just doesn’t bother them.  As a matter of fact, they probably like looking for worms in the rain since the rain cause the worms to come to the top of the soil.  Now, that doesn’t seem so dumb.  As I went to the coop this evening caring a bag of feed, I thought the chickens were pretty much up for the night.  It was not quiet dark, just dusk.  As I went in the door, I happened to look back towards the hay-feeder and saw several hens jump down and make a bee-line for me.  Apparently they knew what was in the bag.  After filling the 50 lb feeder, I was heading back to the house.  The rooster who hangs out in the coop was chasing one of the hay-feeder roosting hens.  Well, the rooster who sleeps in the hay-feeder with his harem did not like this at all.  He hopped down and began to chase the rooster who was chasing the hen- kind of like follow the leader at break-neck speed.  Like I said, the chickens make me laugh- and they make me eggs!

Another cold front is moving in tonight.  With the temperature dropping to 30′ tonight, we might have ice in the morning and possibly some snow.  Thankfully, we won’t have to turn on the heaters in the greenhouse.  The plastic alone adds 5 degrees so it won’t drop below freezing.  It should not get that cold until the weekend.  With the sun shinning, I plan on bumping seedlings then.  Before we know it, January will be over and then only four more weeks of heating the greenhouse.  Once March gets here the danger of the greenhouse dropping below freezing will be over.    I look forward to March, but I am enjoying today.

2 thoughts on “Visitors at the Farm”

My current read🤓
As you can see from my face- I had a great time all the while working my butt off and stretching myself. Last night I completed the digital marketing book camp with the McCombs School of Business at the University of Texas at Austin.
Lots of love! Christmas at Grandmother's
May your holidays be this relaxed!
You know- when you find out that the homework project that made you cry earned an A!
Did a little baking on this stormy Saturday night!